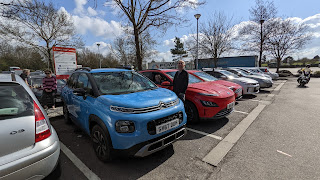 Friday 18th to Friday 25th March 2022, Long House at Cockthorpe in Norfolk. The house was booked for ten of us but in the end only seven made it.  I drove Clive to Ian's where we helped to load Ian's stuff into mine and his cars.  Ian was driving his all electric car to Norfolk.  Simon was driving Cloughie and Bob was driving Paul. Met up with Ian on the M11. Over £500, thanks Simon. Coffee in the Stiffkey Stores before we got to the house. First view of The Long House. Cloughie's ready to cook. Ian had the annexe outside. First day out, Holkham Beach, only £9 to park! It was so much fun here, freezing cold wind though. Ian's trail. The Walsingham water pump. Outside the Real Ale shop. Cley next the sea. Stiffkey Hall and the church. Captured this Hare with my big camera. So nice to pay a person to park, Holme next the sea. Huge kerfuffle with Ian's car, trying to find a strap, Bob locking his water bottle inside and me messing up the HUD display! Rear puncture! C
Post a Comment
Read more

Momodem
Married to Ruth, no kids but we have Mabel and Gladys as pets.